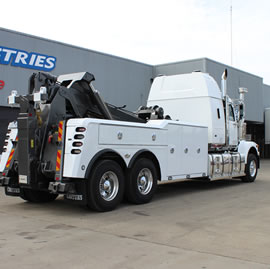 Action Motor Industries has been servicing clients for over 35 years at the same location.

We have come a long way since the early beginnings Michael Zukanovic is founder and a second generation panel beater / spray painter, like his father Michael liked repairing cars and making them look better than new. Michael has developed as a world class engineer and expanded his business into truck manufacturing. Michael has engineered many different styles of commercial vehicles from tow trucks to heavy tow trucks to racing transporters and car carriers.

Michael has always been passionate about racing in his early days he was involved in powerboat racing and as his son Marcus was growing up they got involved in motorsport from go karts to winning multiple Commodore cup championships. This inspired Michael to branch out into development of race cars. Marcus is now competing in V8 Supercar category in Dunlop Series with his Action Racing team.To follow Marcus Racing Career Read More

For Marcus, the latest award was both a complete surprise and an honour to receive.

"I am completely overwhelmed, said a jubilant Zukanovic.

"To win on the track is wonderful and I'm very pleased to have been able to achieve the results I have this year but this is much more of an honour indeed. I'm really humbled by the award and who I was competing against for it.